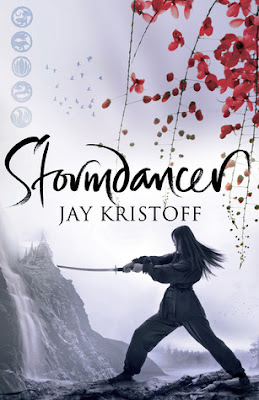 ISBN 9780230759015
Published by Tor
Published September 1st
Five out of five stars *****
I know that I say this a lot, but this book is AMAZING!!! It truly truly is. It is a crossover, so I feel it is suited more for older YA readers. It does have a fair amount of swearing in it. Before I continue with this review here is what goodreads has to say about it...
Griffins are supposed to be extinct. So when Yukiko and her warrior father Masaru are sent to capture one for the Shogun, they fear that their lives are over. Everyone knows what happens to those who fail him, no matter how hopeless the task.

But the mission proves far less impossible, and far more deadly, than anyone expects – and soon Yukiko finds herself stranded: a young woman alone in her country's last wilderness, with only a furious, crippled griffin for company. But trapped together in the forest, Yukiko and Buruu soon discover a friendship that neither of them expected.

Meanwhile, the country around them verges on the brink of collapse. A toxic fuel is slowly choking the land; the omnipotent, machine-powered Lotus Guild is publicly burning those they deem Impure; and the Shogun cares about nothing but his own dominion. Yukiko has always been uneasy in the shadow of power, when she learns the awful truth of what the Shogun has done, both to her country and to her own family she's determined to do something about it.

Returning to the city, Yukiko and Buruu plan to make the Shogun pay for his crimes – but what can one girl and a flightless griffin do against the might of an empire?

Sounds good right?! Well it is!! lol. It's one of those miss-your-stop-on-the-bus kind of reads. Not that I managed to go anywhere, because I just stayed in so I could read it ALL.

It is a beautifully crafted story that is as enchanting as it is absorbing. It whisks you away to the land of Shima from the very first word and holds you captive until the last.

The main characters, Yukiko 16 year old girl and Buruu, the Arashitora (thunder tiger), develop a deep and intense bond throughout the book that is very touching. They seem at odds to start, but survival throws them together and they do it with style!

There are many themes in this book that I found very interesting. I loved the way that it looks at how humans treat the world. Instead of cars and factories spilling out CO2 as we do in our world, in this one it is the use of the Blood Lotus. It describes a world that we may one day find ourselves living in, dependant on the very machines that are killing us. It is a very clever look at our own society, and the way that people will just overlook the obvious truths, and choose to believe something else either because of religion or government. It is the kind of story that gets you thinking about the state of the world we live in and asks its readers to stop and think about what that might mean. That's not to say that its a political book. It isn't at all. It's just that the plot and the setting will make you think, and I don't think that that is a bad thing. These are things that young people need to be, not necessarily thinking about, but aware of. This book does that without you even realising it.

As I said before it is a beautifully written story, with gorgeous descriptions and it flows really well. It has the feel of years of experience behind it, rather than a debut. I am calling Jay Kristoff as one to watch! Luckily this is the first in a series (*yay!*) called The Lotus Wars, so there will be more on the way! :D

I'm not sure that there is much else I can say without delving into the plot and giving spoilers. I will say this though, If there is one book you must read this year, it's this one! If you're not that big a fan of fantasy or have yet to dip your toe in its waters, this will be a great one to start with. It has action, great characters, an amazing plot and this is all inside a super pretty cover! lol Seriously though...

Our next book will be Ketchup Clouds by Annabel Pitcher. The meeting will be on the 10th October from 7-8pm in the Costa Coffee behind the Bluewater Waterstones store. Come along and join us for bookish chat and cake!!

The 5th Wave
by Rick Yancey

The Bunker Diary
by Kevin Brooks

The Dogs of Winter
by Bobbie Pyron

The Knife of Never Letting Go
by Patrick Ness

Hidden Among Us
by Katy Moran